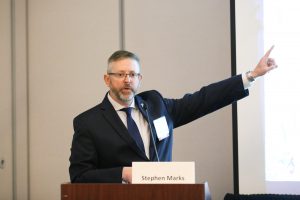 Stephen Marks from Hoboken makes a point about new approaches to stormwater management.

The horizon for stormwater management in New Jersey is about to change significantly. As part of the 2019 Redevelopment Forum on March 8, a panel consisting of Michele Adams, president of Meliora Design; Adrienne Vicari, financial services practice leader at Herbert, Rowland and Grubic; Gregg Woodruff, sustainability leader at Langan Engineering and Environmental Services; and Stephen Marks, business administrator for the City of Hoboken, highlighted several major initiatives that will influence how future development is managed and how it will affect the environment.

In the past, developers were required to incorporate non-structural stormwater management strategies into major developments “to the maximum extent practicable.” A new rule proposed by the state Department of Environmental Protection requires the use of green infrastructure to manage stormwater, either by absorbing runoff through vegetation systems or soil infiltration, storing it for re-use, or redirecting it to recharge vital underground aquifers. Examples include vegetated islands in parking lots and sustainable parking fields that retain runoff.

In addition, the application of new technology has opened up a new world of possible solutions. For example, computerized telemetry can monitor conditions in surrounding waterways in real time, providing vital data that determines the rate at which stormwater can be safely released from underground detention systems. Such projects produce a stream of benefits, including reduced flooding, greater erosion control, and improved water quality.

To help support these efforts, legislation (S-1073) pending before the governor would authorize localities to decide whether to create a stormwater utility, a tool that has been implemented by more than 1,800 communities nationwide, including many in Pennsylvania and Delaware. Similar to existing water or sewer utilities, stormwater utilities would generate dedicated funding for stormwater management, which is underfunded in many localities due to fiscal constraints and competing priorities. This financing solution, which involves a fee assessed on “impervious cover” (e.g., hardened surfaces such as driveways and roofs), is more equitable than property tax revenue, as there is no relationship between the value of a property and the amount of stormwater runoff that it generates. The legislation includes an important incentive, allowing feepayers who mitigate runoff from their property to receive credits that can significantly reduce the size of the fee.

In many cases, however, stormwater is a regional problem rather than exclusively a local one; runoff from upstream towns is often a key factor in flooding and water quality problems experienced in downstream towns. Communities in other states, including Pennsylvania, have realized unique benefits by adopting a regional approach to stormwater management: cost savings and economies of scale from implementing a small set of large projects, elimination of duplicated services (e.g., planning studies), and increased purchasing power, including cooperative purchasing of common mapping and data elements. For example, in Luzerne County, Pennsylvania, 32 localities have banded together in a partnership organized by the Wyoming Valley Sanitary Authority. The authority collects the fees, administers the required environmental permits and implements improvement projects, while the individual towns maintain ownership of their local stormwater assets and responsibility for compliance, adopting ordinances and providing periodic reports in support of the program. When compared to the spending that would have been required if each town had implemented stormwater improvements unilaterally, this approach is projected to save an estimated $57 million in capital costs over a five-year period.

The City of Hoboken provides an example of a different approach to management of stormwater problems. More than 70 percent of the city resides in a flood zone, and large storms have inflicted considerable damage to public and private property. The city, which is largely covered by impervious surfaces, incurs significant costs in its budget, including annual payments of nearly $6 million for property insurance. To address these costs, the city has implemented or planned a series of major stormwater control projects to improve its resiliency.

To finance this work, the city established an open space trust fund that generates approximately $2.5 million in annual revenue through an assessment of 2 cents per $100 of assessed property value, or an average of between $500 and $600 per property owner per year. These funds are used largely to pay debt service costs associated with low-interest loans issued by New Jersey’s I-Bank, which is operated by the New Jersey Environmental Infrastructure Trust.

These initiatives are just some of the tools that localities and developers can draw upon to deal with stormwater in the years ahead.